The water is transparent, colourless and odourless, with a slight bitter taste, it contains dissolved gas, mainly nitrogen or azoe, that form little bubbles.

It is an hypothermic water, softly mineralised, the most common ions are the carbonate, bicarbonate, chloride, sodium and magnesium. Declared of public use in 1871.

Since the beginnings of the 20th century, the thermal spa got specialised in inhalatored treatments, stopping the traditional use of the waters in baths or hydrotherapy.

Different kinas of inhalation have its different effects : Analgesic, sedative, spasmolytic, decongestant, anti-inflammation and antialergic. They improve the respiration by extending the respiration movements which increase the oxygenation and lung’s circulation. It also decrease and fluidificate secretions.

The low mineralization of the drinking water has diuretic effects which help to eliminate some elements as uric acid. 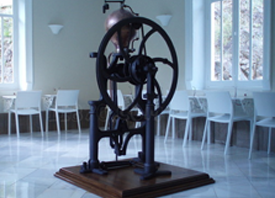